Father's are the hardest to buy for... Until now! Cheese.

That's your answer and damn fine cheese at that. In our International Father's Day Pack, our cheesemonger specially selected 4 cheeses that he wanted to get from his kids. Behind the scenes, he's been working hard with cheesemakers around the World to create something special...

his is a great everyday nibbling cheese. The first sensation is of small lactate crystals that offer a slight crunch meanwhile the butteriness and smoothness surprise considering this is meant to be a hard cheese. The richness of the cheese can offer up hints of Brazil nuts and burnt caramel and finish with a slight saltiness. The sheep graze on shrubs and grasses of the Dahesa, producing a thing and aromatic milk. The sheep’s milk will give its usual subtle aroma of lanolin and roast lamb. The inedible wax pattern on the outside was traditionally created with plaited bands of esparto grass.

Opulent in its creaminess, Le Conquerant is everything you want from a Camembert. With faint hints of wet straw and apple on the nose, its secret lies in the use of specially selected cultures, moulds, and yeasts, and of course rich Normandy milk.

A pungent and complex cheese with strong grassy flavours. The cheese will continue to ripen beyond 8 weeks but the pungent flavour and aroma may be too strong for some. If you love a stinky, let it fully mature, but if you’re new to the whole washed rind game, then perhaps taste test a little now and see if it’s developed to your liking.

To many, the name Mauri is not one associated with Italy. But the first records show this surname to surface in Milan, the capital of Lombardy. It wasn’t until 1920 that Emilio Mauri recognised the high quality milk of the Lombardy region was prime for cheese making. This region was already famous for its Taleggio and Gorgonzola. Emilio merely carried on the tradition and left behind his legacy of one of the highest regarded cheeses in the region. To this day, the cheeses are ripened deep within caves of Valsassina leading to a damp, dark and mould growth that excited all blue lovers.

When will Dad get his cheese?

All packs ordered prior to or 29th of August at the latest, will arrive in time for Father's Day on 5 September. We will start shipping from 30 August to ensure every father around the country will get it for the big day. Just remember, it's up to him if he wants to share it. ;)

Each pack includes tasting notes on each of the cheeses as well as pairing suggests for food and drinks.

Flat rate shipping of $9.95 for order with only non-chilled and $14.95 for chilled items from Cheese Therapy

Every cheese was delicious, thanks Mr D'Arcy

My stepfather couldn't stop raving about the Father's Day World Pack's excellent cheeses and grazing pack. He spent a week eating his way through it and in the process got a new nickname. Now, he will forever now be known as the Big Cheese. Highly recommended.

c
carmen bellion (Northcote, AU)
Lovely gift for that person who has everything!

Lovely gift for that person who has everything...who doesnt LOVE cheese!?
Beautiful cheese, the packing and presentation was very good. The "rusty" cheese was spectacular- our favorite. The blue and camembert also very good! The hard tasty cheese was a bit of a let down, lacked flavour.
All arrived as promised. The infomation and parring cards were a nice touch. 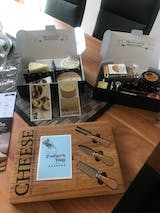 I’ve now sent my parents four cheese packs, I added the grazing box to the Father’s Day world pack, they love the cheeses, this is a great gift for people who don’t need “things” this is a brilliant gift idea and is my go to for presents for Mum & Dad.